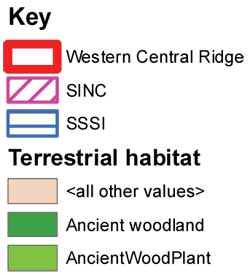 The Needles headland and Headon Warren as far east as Freshwater Bay, where the chalk is breached by the Western Yar valley. Afton Down eastwards to Carisbrooke Castle, including Compton, Brook and Mottistone Downs and Brighstone Forest, an area of secondary woodland.

Chalk with some areas of ferruginous sands to the south, and clay silt and sand to the north at the base of the slopes.

Clay with flints on the chalk.

Stacks at The Needles and sheer chalk cliffs west of Freshwater Bay. The ridge runs west-east across the Island with shallow valleys (Western Yar, Chessell, Rowridge, and Bowcombe) running north-south.

SSSIs : Headon Warren and West High Down, Compton Down, Mottistone Down, Calbourne Down, Rowridge Valley, Garston’s Down

Tennyson Trail runs along the length of this area.