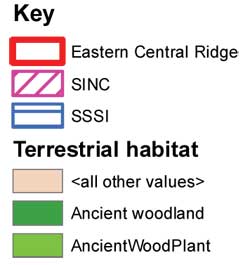 A ridge running between Newport in the west and Culver Cliffs in the east, breached by the Eastern Yar valley at Brading.

Rolling chalk downland with northern slopes well-wooded, giving way to pasture land.  Lower sandstone hills giving way to arable fields to the south. Quarrying at the western end, and in the vicinity of Knighton.

Chalk with areas of ferruginous sands to the south, and clay silt and sand to the north at the base of the slopes. At the western end it includes a sandstone outcrop.

Some small areas of Clay with flints on the chalk. Extensive areas of River terrace deposits on both chalk and ferruginous sand at the western end.

Sheer chalk cliffs at Culver Down. The ridge runs west – east across the Island breached by the Eastern Yar running north-east /south-west

Bembridge Trail runs along the Downs between Bembridge and Newport