Renewing the quality of the air, soil and water and providing natural flood and sea defence systems. Everything we have comes from our surroundings.

Nature provides us with ecosystem services that benefit us every day, including clean water, food, medicines, and protection from floods. Our physical environment supports all life and we draw pleasure from these natural elements of our surroundings.

The Island has long been considered a classic area for the study of earth sciences and the importance of the Islands geological heritage is recognised by the extensive network of Sites of Special Scientific Interest (SSSIs) which protect this unique inheritance. It is a dynamic and finite system. Plants renew the balance of the atmosphere and our coast changes under the influence of weather and the sea. Human activity modifies the environment, and issues such as sea level rise and climate change need to be addressed. Systems which work with nature are being promoted as long-term environmental solutions to issues such as soil erosion, flood defence and coastal protection.

Catchment Sensitive Farming
The Hampshire & Isle of Wight Wildlife Trust is working in partnership with the Environment Agency and Natural England to deliver the Catchment Sensitive Farming Project on the Isle of Wight. This project aims to provide well informed advice and guidance to farmers and landowners on all aspects of catchment sensitive farming. The project officer will also provide assistance with applications for grant funding to protect water resources, address diffuse and point source pollution and enhance wetland habitats.

Working with nature to protect important geology
To slow down erosion, and at the same time protect unique peat and clay deposits dating from the Ice Age, the beach alongside the Bembridge Coast Hotel has been replenished with local gravel. The resulting shingle bank acts as a barrier to the waves, reducing their effect on the cliffs behind.

Grants to encourage landowners to plant more trees
The Forestry Commission’s JIGSAW (Joining and Increasing Grants for Semi-natural Ancient Woodlands) Scheme which was first launched in 2000, has enabled over 200 hectares of new woodland to be planted for the benefit of wildlife and brought over £800,000 to Island businesses and landowners. These connections will act as corridors to allow wildlife to spread. Trees can also help minimise soli erosion with their roots systems binding and holding back soil. With the help of Hampshire & Isle of Wight Wildlife Trust and other partners, farmers and landowners have been encouraged to take up the scheme. 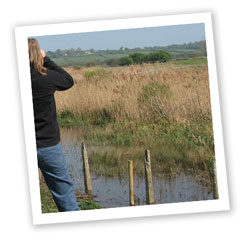 Improving the environment and reducing flood risk
Concrete channels have been removed from the confluence of the Lukely Brook and Gunville stream at Towngate in Newport and the former pond has been re-instated as part of an Environment Agency scheme. Sculptures and seating were installed by Island 2000 Trust and wild flower planting has taken place. It is an attractive place for wildlife and people in the heart of the town as well as providing flood storage capacity in times of heavy rainfall.

A new project being led by Natural Enterprise in partnership with the Environment Agency to restore and enhance sections of the upper Medina River has been awarded funding towards a two year scheme. The first phase of this exciting project is to restore the critical 3km of the main river from the tidal limit of the Medina in the centre of Newport upstream to Blackwater. The aim is to ensure the in-stream and bank side habitats are of the quality needed to support target Biodiversity Action Plan (BAP) fish species; the brown/sea trout and the European eel. Other species to benefit from the work will be the water vole and the bullhead fish. 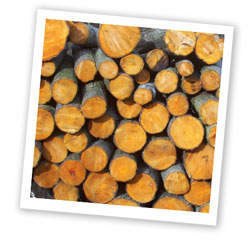 To offset the impact of sea defence improvements at the low-lying Seaview Duver on the north coast of the Island, a nature reserve has been created. The existing lagoon at the Duver has been enlarged and improved for wildlife along with public access and installation of interpretation and a bird hide and has become a well used and much valued local resource. BAP species which have benefited include water vole, chamomile (Chamaemelum nobile) and divided sedge (Carex divisa) which have all seen increases in their population as a result of favourable management.

Biomass Fuel
As oil became so widely used for fuel instead of wood over the past 50 years and with no real financial incentive for landowners, many woodlands have been neglected over the years.

However, woodfuel production is becoming increasingly important to our woodlands here on the Island as it is a sustainable resource by harvesting the unwanted timber as fuel for biomass boilers and also gives the opportunity to regenerate small woodlands for biodiversity. There is advice and help available for interested woodland owners from the Wood Works Wight project.